HomeBlogExerciseCore Exercises – A Thing of the Past

Core Exercises – A Thing of the Past

CORE EXERCISES A THING OF THE PAST

Physiotherapist and Exercise and Sport Scientist

Do you spend hours tirelessly doing ab crunches and planks to no avail? You may feel the muscle ‘burn’ however is this actually the best way to strengthen your abdominal muscles?

Your abdominal muscles play a vital role in stabilising the core by stiffening the torso and transferring energy from the legs to the upper body, utilising our anterior and posterior oblique sling systems (refer to blog on this topic). In conjunction with this there is evidence that better core strength can lead to reduced low back pain and improve sports performance. This is because having a strong ‘core’ equates to a greater muscle activation rate and rate of force production of the abdominal muscles. In conjunction, higher rates of type II muscle fibres (fast twitch) are recruited, of which have a greater hypertrophy capacity than type I (slow twitch).

There are two approaches to abdominal and core-based strength.

The plank is an example of an isolated abdominal exercise performed with variations in duration and unstable surfaces. However isometric, single-muscle, and isolated core exercises from a prone position may not transfer effectively to the predominately erect dynamic activities of daily living and sports performance.

While an example of a dynamic functional exercise using the core muscles for support is the squat or deadlift. These dynamic multi-joint resistance-training exercises integrate and mimic core muscle activation that is similar to the activation patterns in sports and daily activities. Resulting in better transference of strength and motor control to functional tasks thought our day.

A study done in 2018 compared core muscle activation during a prone bridge (plank) until failure and 6-RM back squats. As seen in the graph below, the squatting group had increased erector spinae activation (back muscle) and similar rectus abdominis and external oblique (abdominal muscles) activation as the prone bridge, interestingly the longer the exercises was performed the abdominal muscles reduced in activation while those performing the squats had an increase in muscle activation during the exercise.  The activation patterns are similar, however the squat and deadlift are movement patterns that have superior transference to activities carried out daily opposed to exercises where the core muscles are activated in isolation which does not mimic movements in sport or daily living activities.

At Move Physiotherapy we recommend targeting core muscles through integrated high-intensity, and load functional exercises such as the squat instead of an isolated and isometric core exercise. This approach will improve injury prevention, and improve sport specific performance, while improving your capacity to complete daily tasks.

Figure 1: muscle activity of erector spinae, rectus abdominis and external oblique, at the start, middle and end of the 6-RM squat and prone bridge. 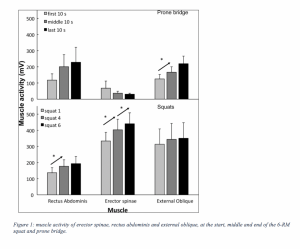 Book a 30 Minute Initial Physiotherapy Appointment for Only $67!